Polytechnic Institute, is an internationally-recognized expert in the field of mechanical engineering.  She worked at General Electric from 1950 until her retirement in 1987.  During her thirty-seven year career at General Electric, Dr. Fitzroy specialized in heat transfer and fluid flow research for application in nuclear reactor cores, gas turbines, space satellites, and other technologies.  She has written over a hundred technical papers, and holds three patents.

In 1986 Dr. Fitzroy became the first woman in the United States to head a major professional engineering society, the American Society of Mechanical Engineers (ASME). In 1988 she was chosen as an Honorary Fellow of Britain's Institution of Mechanical Engineers.  She was elected to the National Academy of Engineering in 1995, and inducted into the Rensselaer Polytechnic Institute Alumni Hall of Fame in 1999.  In 2008, ASME awarded her with Honorary Membership to recognize "her tireless efforts and lasting influence as an advocate of the mechanical engineering profession."

Dr. Fitzroy is also a a licensed airplane and helicopter pilot.

Below: Nancy with husband Roland.

Above: Passport photographs of Nancy and husband Roland, who travelled togehter on one passport.

Below: Nancy piloting a Hughes helicopter.

Below: The ASME Nancy Deloye and Roland V. Fitzroy Medal

Below: Door to the Nancy Fitzroy Conference Room at the Hilton Garden Inn in Troy, New York 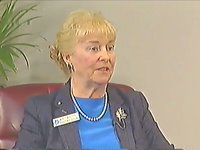 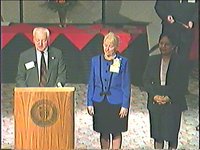